In 1967 south El Paso mothers and grandmothers came together with a mission to establish a health care clinic to address the needs of their low income community. This organization was based inside a slum tenement known as “Los Seis Infiernos.” It was later named Father Rahm Clinic, in honor of Father Harold Rahm, who was a Jesuit priest and social justice activist who had served the community during the late 1950’s. In 1973 the organization was renamed to Centro De Salud Familiar La Fe, Inc. A year later the organization moved to its first official site at 608 S. St. Vrain. As the community grew so did their health needs which initiated the search for a new location. A Baptist church building, directly across the street from the site where the Seis Infiernos tenements once stood, serves as the clinic’s new home. 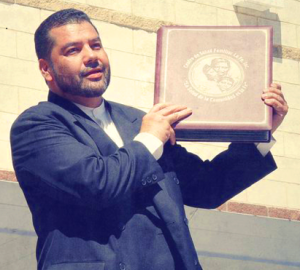 Salvador Balcorta, once a teen social-justice activist, La Fe volunteer, and community -outreach worker took the reins as La Fe’s executive director in 1992. Within a few short years Balcorta led the organization out of its federally dependent status and toward a new era of growth and development.

He began to spread the clinics around El Paso starting with the San Elizario clinic which serves thousands of low income families in the lower valley. The Lisbon clinic, the third satellite clinic, became the regions first public housing clinic to establish a family practice in the middle of a multi family community. In 1999 La Fe celebrated the grand opening of the Child and Adolescent Wellness Centers medical component. Four years later the technology division was opened, La Fe Culture and Technology Center, which includes a state of the art recording studio, a multi purpose auditorium and theater, graphic arts center and classes in computer literacy cultural arts and crafts, music, dance, GED, and U.S citizenship preparedness. Within the next ten years the Westway clinic, Social Services and Behavioral Health Services Department, Jose Roman Pediatric Clinic and a WIC office were established and became part of La Fe’s  growing organization. During this time La Fe Preparatory School opened its doors in the heart of Segundo Barrio. This public charter school offers its students a dual language education with a curriculum based on arts, culture and technology.

Today, Le Fe still runs under the concept of “la totalidad de nuestro bien estar,” the totality of our well-being and continues to provide services to low-income community members.